Although there are only a few areas with ice in the county, Iceland has to be one place in the world that people seem to overlook or only go to for a weekend at the blue lagoon  and not bother explore what this absolutely gorgeous county has to offer. Iceland has quickly become one of my favourite countries ever. The freezing temperatures were not enough to scare me off. From the stunning black sand beaches to gigantic floating icebergs, I want to reveal some of Iceland’s hidden gems that should be on everyone’s bucket list.

I visited Iceland in December 2017 with my travel buddy Sophie. We hired a car to make our way around the island. This was the only option as the only public transport available are in the larger cities. We spent the first couple of nights in Iceland’s capital city, Reykjavik. The city is rather unusual, not like a city at all really. To be honest, Reykjavik doesn’t portray Iceland’s natural beauty that starts only at 20-minute drive away. The people are very friendly and speak very good English, which made moving about the city very easy. The city has plenty of hostels or hotels so there is bound to be one that will take your fancy. One of the main attractions within Reykjavik is the Viking longboat called Sólfar (The Sun Voyager). This landmark sits on the waterfront and is constructed from stainless steel and stands on a granite circle. Also found within the city is Hallgrímskirkja church. This enormous concrete building is one of the most popular sites within the city, and due to it being one of the tallest buildings in Iceland, it can be seen from almost anywhere in the city. Inside this church is unbelievable. The massive interior is beautifully designed with a gorgeous big organ as you walk in the door.

During our time in Iceland these places have to be my all-time favourite and should definitely be on everyone’s list:

The highlight of the trip was most definitely sitting in a hot tub, in our hostel in Hvolsvöllur watching the northern lights. It was a surreal experience, but unfortunately my camera skills were not up to scratch and it looked like a green worm squirming across my screen.

Driving in Iceland is fairly easy. The only time we really had bother was when we got stuck in a snow blizzard, moving not even 10km/h for a good few hours. It was pretty scary and not like anything we had ever experienced before, but let’s just say we were both glad of the 4WD we had hired. Because of this snow storm, we ended up getting stuck an extra night in Höfn and ended up having to turn and go back the however many km we had just endured. But I suppose that’s what you get when you decided to go in the middle of winter to a place notorious for snow and ice.

There are many, many more places I would highly recommend visiting whilst in Iceland, but I would be here forever if I was to tell you about them. So, you’re just going to have to visit this magnificent country and let it show you just how gorgeous it really is. 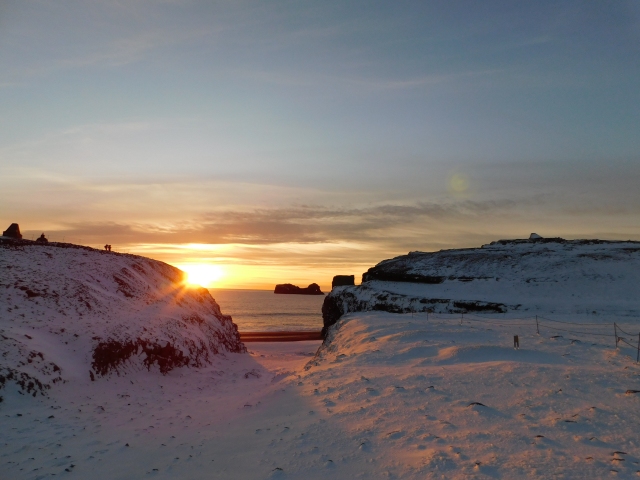